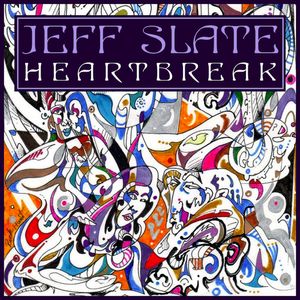 Produced by Slate and Eric Lichter, “Heartbreak” was written earlier this year and recorded in sessions spanning the globe during the current pandemic lockdown and is the first evidence of the sessions for a promised studio album in 2021.

The track was mixed by the legendary Duane Lundy at the Lexington Recording Company and mastered by Justin Perkins at Mystery Room Mastering. The single’s arresting cover is by artist Rick Hunt, who has supplied artwork for Slate’s releases since his first solo album, 2012’s Birds Of Paradox. The design is by Jared Friedman.

“I’m incredibly proud of ‘Heartbreak,’” says Slate. “Everybody brought their absolute A-Game to the sessions, and that was inspiring and humbling, considering the players involved. I dug deeper and reached higher on the song and in all the writing I’m doing now. It all feels like an exciting new direction.”

“I’ve worked with Jeff Slate for a long time, and when I heard the song, it was definitely all him. You could hear the influences, but filtered through his own distinct sensibility,” says the legendary guitarist Earl Slick of the track. “As soon as I heard the track – and I only listened to it once or twice – I knew instinctively what to do. The song and the vibe were great, so it wasn’t me trying to fit myself into somebody else’s vision. And it sounds like a band, which is cool considering we were all over the world when we did our parts.”

“Heartbreak” follows hot on the heels of the whopping 43-song live album Slate released in August. Lockdown Live was recorded live during Slate's #StayHome online concert series during the COVID-19 enforced lockdown this year. It featured nine original songs by Slate from throughout his solo career, as well as during his tenure with The Badge, the band he founded in 1997, as well as songs by Tom Petty, George Harrison, John Prine, Warren Zevon, Lord Huron, Marvin Gaye and others. The second disc of the two-disc set included nineteen songs written by Bob Dylan (plus one Traveling Wilburys number).

Slate’s now long-running online concert series regularly attracts thousands of views per week, and within just days of the release Lockdown Live the album had been streamed over 5,000 times on Spotify. Videos for the Slate original “San Francisco Days” and a lyric video of an outtake version of the Oasis classic “Slide Away” had racked up similar numbers.