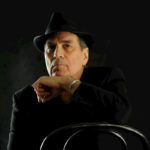 On this final day of the conference, we will once again feature another great singer-songwriter who will talk broadly about the ways in which Dylan shaped his craft and what he can still teach artists who are working in this vibrant tradition. Eric Andersen first came to prominence in Greenwich Village in the early 1960s, where he honed his craft alongside Dylan, Dave van Ronk, Phil Ochs, and Tom Paxton. In the years that followed, he grew into what Rolling Stone has called “one of our finest singers and songwriters, in the most literal sense of that tradition.” He has released 30 albums of his own material and his work has been covered by Gillian Welch, Linda Ronstadt, the Grateful Dead, and many more. He is the subject of the new PBS documentary, The Songpoet. This conversation will range broadly across life, work, and career and will help us better understand Dylan’s art and artistry.