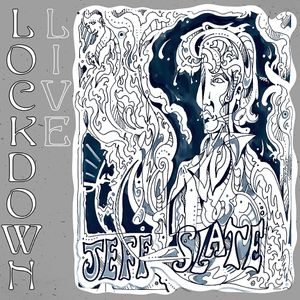 The songs on Disc One include nine original songs by Slate from throughout his solo career, as well as during his tenure with The Badge, the band he founded in 1997, the song “My Dolly,” which he co-wrote with Simon Townshend for his 1993 The Townshend Tapes, as well as songs by Tom Petty, George Harrison, John Prine, Warren Zevon, Lord Huron, Marvin Gaye and others. Disc Two includes nineteen songs written by Bob Dylan (plus one Traveling Wilburys number).

I Won’t Back Down

Letter From Paris (Showed Me The Way)

A Little Piece Of Me

The Night We Met

The Ghost In You

Let My Love Open The Door

Less Than What You See

Give Me Love (Give Me Peace On Earth)

Tonight I’ll Be Staying Here With You

The Man In Me

The Lonesome Death of Hattie Carroll

If Not For You

Tangled Up In Blue

If You See Her Say Hello

Every Grain Of Sand

All Along the Watchtower

I Shall Be Released

Slate announced the August 14th release of Lockdown Live on CD and download, plus related merchandise, with profits to benefit social justice causes, last month. The recordings are drawn from his online shows, which began airing weekly via Facebook Live and Instagram Live on April 4th, and which included a special edition for Martin Guitar's “Jam In Place” online series. They’ve been a smashing success, with recent shows garnering over 6,000 views in just a few days four days. Slate has played over 100 different songs during the series, including originals from his Birds Of Paradox (2012), Imposters & Attractions (2013) and Secret Poetry (2016) solo albums, his 1993 EP The Townshend Tapes, for which The Who’s Pete Townshend acted as executive producer, songs he wrote for the band he founded in the 1990s, The Badge, and covers from artists as diverse as Tom Petty and John Prine to the Psychedelic Furs and the Boomtown Rats.

Pre-orders for the August 14th release on CD and download, as well as Lockdown Live T-shirts and bundles including the CD and shirt together, are now available in the store at www.jeffslatehq.com.